We had a fantastic day. The rain came briefly to drizzle lightly upon us but didn’t dampen our spirits or those of the crowds of lovely people who came to visit and fill their bellies. Keep following us to find out news of our next pop-up Asian market. Thank you to our great partners SEA Arts Fest and Bangkok Kitchen; lovely vendors A Grape Night In, Azi’s Kitchen, Bunta, Pepe’s Kitchen, Pitstop Cafe, Rangoon Sisters and Woolfson and Tay; the fabulous 5 Foot Way team who bust a gut to keep things running smoothly with happy faces; and, of course, the brilliant hordes who came to support and taste all the great food.

Putting this market together has been one heck of a journey. There has been so much to do and think about in order to make it happen and try to make it a success. Sadly, it’s meant I’ve not really been able to blog about it as much as I’d have liked to.

However, one thing that has really struck me is how despite sometimes feeling like you’re on your own with the long hours spent planning and publicising, sorting out equipment and facililties, persuading our amazing stalls to come on this journey, marketing and meeting, printing and leafletting; the truth is that in a few months I’ve grown a network of amazing partners and friends who have been incredibly supportive and helpful in providing their experience, knowledge and wisdom, trust in the idea and project, enthusiasm, hands-on practicality and good humour.

Early on, I had approached one of our partners, BanhMi11, to take part in the market. I had seen them a couple of years ago on television in Nigel Slater’s cooking show about contrasting and complementary flavours, making delicious grilled fish summer rolls and at the time had sat up and taken interest. I was enthused to see two Vietnamese women creating authentic SE Asian food from their home country and family experience on prime time television. Nigel didn’t give many clues as to who they were – just mentioning that they were from a market in East London. This set me on a mission to track them down and sample their food.

The street food scene was already burgeoning in markets at the time but this was probably about the start of the great pop-up markets like Kerb, StockMKT and Street Feast; and in general East Asian food stalls were not widely represented. From trusty Google, I managed to work out that they were probably one of two stalls in Broadway Market selling Vietnamese food; and my money was on BanhMi11, judging from their website. It was interesting to read their story – two friends with day jobs, who had given these up to follow their passion for the food of Vietnam. I visited the market and, on a cold rainy winter’s afternoon, sat in our parked car with a steaming cardboard container of their 3-day cooked beef pho, savouring the light flavoursome stock, delicious herby beef and noodles and blow your head off fresh-cut bird’s eye chillis.

But East London was so very far away…

Nonetheless, I visited when I could and watched their progress, as they grew and expanded – running deliveries to Canary Wharf, setting up their dining club and opening more stalls. Then, when my office relocated to Soho, I found one day from their website that they were opening a new stall on Berwick Street in the lively week day market. How excited was I? Hopping and skipping excited I can tell you.

On their first week I was there 3 times in the same week. Their banh mi, French baguettes filled with incredible meats or tofu cooked to their own delicious recipes, were always the most popular and there was often a long queue. For me, though, I loved the Imperial Pork BBQ on Vietnamese bun noodle salad or the delicious heady beef pho with lashing of fresh chilli.

When my office moved again, I was so disheartened and said to the friendly stall manager that if I could find a spot down in Southwark for them would they come? She said – find us a spot and we’ll see what we can do.

In my new setting, I’d spent my time wandering around the local area, looking for new places to eat that satisfy my cravings for the food from home and other parts of SE Asia; but also trying to find ways to entice restaurants and street stalls down to this neck of the woods. This part of Southwark/Bankside sits in between two busy hubs – the London bridge area and Waterloo/Southbank areas, with lots of tourists nearer the river around the Tate Modern and Shakespeare’s Globe. Yet, the businesses which are moving in aplenty, and the local resident communities are poorly served for independent local eateries and shops.

Fortunately, things are changing and there are some gems that have been around a long while, like Pickles caff on Great Suffolk Street, or relative newcomers, my local favourites Woolfson & Tay and Bangkok Kitchen. When I took the challenge to put this market together, BanhMi11 were amongst the first I contacted hoping they would be able to join us. Since I’d seen them last, they’d opened two shops and become stars of the street food scene, demonstrating in huge shows like the recent Foodie festival at Battersea Park. So, it was a long shot…

They were incredibly supportive, saying they’d like to help however they could but they were hoping to move into a new direction, exploring ideas in events that would explore different concepts or the role food, the preparation and eating of it, plays in Eastern culture. Would I be interested in an event like that? This intrigued me as, being Malaysian, our food culture is very much centred around communal eating and sharing of dishes. We sit around the table, sharing the same food and many foods like dumplings or summer rolls are prepared together, with everyone sharing the workload. Steamboat is a great favourite of mine, where we sit together at the table, plunging all manner of delicious meats, seafood, vegetable and noodles into steaming hot broth to cook and then devour it all, drinking the flavoursome soup at the end of the meal.

I am thrilled therefore that they are going to be at 5 Foot Way’s first market, talking about their fond experiences of Vietnamese culture and food, drawing upon the recipes in their first and new cookbook, The Vietnamese Market Cookbook, to draw us into that experience of shared communal eating. In this extraordinary event, diners will get to try their hand at making delicious summer rolls together, guided by Van and Anh, the friends who founded the company, and enjoy that communal sense of sharing whilst still making it on their own.

This has been a great journey and I’m looking forward to a spectacular day and event.

UPDATE: THIS EVENT HAS BEEN CANCELLED. Unfortunately, due to unforeseen circumstances, BanhMi11 have had to cancel this event. Apologies for any inconvenience caused and we hope you will enjoy the rest of the market.

Hang on a moment, I hear you say – what does a bookshop have to do with a street food market? All will become clear…

Our second vendor can only be described as the perfect bookshop. Still… what does this have to do with food, I hear you holler. Bear with me…

Woolfson & Tay is a local independent bookshop, very conveniently placed just around the corner from my office, and a mere skip and a hop from the venue on Union Street, where our first pop-up market is being held. Originally the bookshop was in that delightful corner of London that is Bermondsey Square and I tried to make it over there whenever I could. Their selection of books is thoughtful and seems to cover the whole spectrum of fiction and non-fiction that particularly tickles my fancy. A cookery book or travel writing, new novels or classics, children’s book or minority writing – it’s all there with handy tips from the team on which are their recommended reads, or you could have a chat with them about the books if you needed a bit of a steer. But when their lease came up, they moved into Bear Lane and that’s when I really got to know more about them.

Imagine my excitement, whilst plodding my weary way to work one morning to see a sign go up in an empty unit proclaiming that W&T would be opening there soon. Ooo – straight off to the internet went I, and lo and behold, it was true – W&T were coming! And what’s that – they hold author talks and events… and they have tai chi classes on Saturdays… and they have hot beverages and amazing cakes by Kaelie… 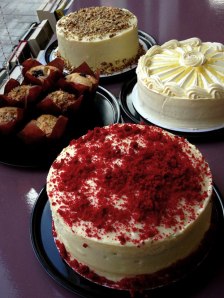 …and, this is when I nearly fell off my chair… HOT ASIAN LUNCHES. Oh… my… god… that I didn’t know… is this the perfect bookshop or what?

Next thought in my mind was – what kind of Asian lunches? They were still in the process of refurbishing and there were no details on the proposed menu on the website yet. Still, this was a big step in my evil aim to make this part of London my little South East Asian culinary enclave. I had a suspicion that Tay might be Malaysian which could only bode well. As countdown commenced to their opening day, they announced a soft opening – no lunches yet but soon to follow. Positively champing at the bit by this point, their menu went up for the first week’s lunches – a different meat or veggie option each day ranging from Malaysian chicken curry (yes!) to Chinese mushroom and chicken cooked with goji berries (sounded Chinese but could be Malaysian Chinese), and other tasty sounding dishes.

First lunch day – oh no, lunchtime meeting, I couldn’t go – but my Malaysian food obsessed colleague went down and came back with chicken curry and rice. He was unsure… needed more chilli and spices, might be watered down for English tastes. Oh dear, I thought, that’s a shame. But then the following week, nasi lemak was on the menu. Undeterred I was straight down there and delighted to see a huge vat of rich, unguent chicken curry swimming with curry leaves, star anise, cinnamon sticks emitting an heady aroma. This was accompanied by a thick, rich, radioactively red chilli sambal, ikan bilis (crispy fried anchovies), cucumber and coconut rice. With my bounty hot in my hands, back at my desk was the great unveiling of what has become a firm Bankside favourite. Oh the curry was good – thick and full of flavour. The sambal was sweat-inducingly spicy (and has become even more so over the months) and the ikan bilis were crunchy little morsels of salty, savoury delight. I thrust my plastic box of deliciousness in front of my colleague’s face who agreed that it looked much improved, and on tasting he proclaimed it so. A success!

Woolfson & Tay has become a firm lunchtime favourite at our office now. We takeaway several times a week and are sad when Frances Tay is away because she does the cooking, and we are therefore deprived of the tasty goodness they provide. As word of mouth grows, they’ve become busier and busier, and Tuesdays are now Nasi Lemak Tuesdays when we have to get down there quick before the food sells out – usually by 13:00. They are introducing another Malaysian favourite – curry laksa on Thursdays, and I can’t wait.

It was therefore a no-brainer when selecting vendors for the market to ask the lovely Fran to set up a stall to sell her delicious nasi lemak. I really can’t wait!

Have a question or want to say hi?

Go to our Instagram for latest stories and pictures